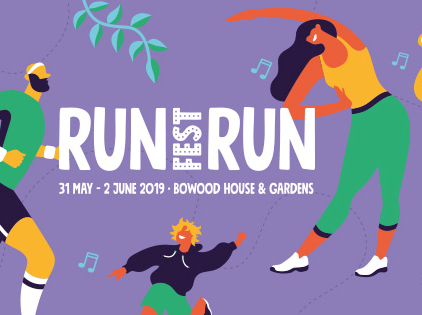 Billed as ‘Britain’s biggest running party’, the family-friendly festival will take place from 31 May – 2 June this year in the beautiful grounds of Bowood House and Gardens.

With a line-up of well-known bands and DJs to be announced shortly, the three-day camping festival will include running routes ranging from an immersive 2.5K fun run through to a timed half marathon.

“We want people to join us for a jam-packed weekend of running while having a great time outdoors with friends and family. Whether it is your first run or your hundredth, grab your trainers and join us for the nation’s big, new running party.” commented Chris Evans

Paula Radcliffe, who will be running with her family at RunFestRun added: “With stunning running routes through the bluebell woods and forest of rhododendrons in the grounds and what I believe is going to be a great music line-up, RunFestRun really will be an unmissable festival for music fans and runners alike.”

Away from the meandering runs through the luscious Wiltshire countryside, Virgin Radio sport presenter Vassos Alexander will also host inspirational talks with sporting legends and incredible endurance runners, while there will be lots of activities for children, plus uplifting fitness and wellness classes for everyone to enjoy.

For more information on the event, visit runfestrun.co.uk.

« Red Bull Active When On Lunch: Milo & The Bull • Strength & Endurance
Back To Calendar
F45 Playoffs »