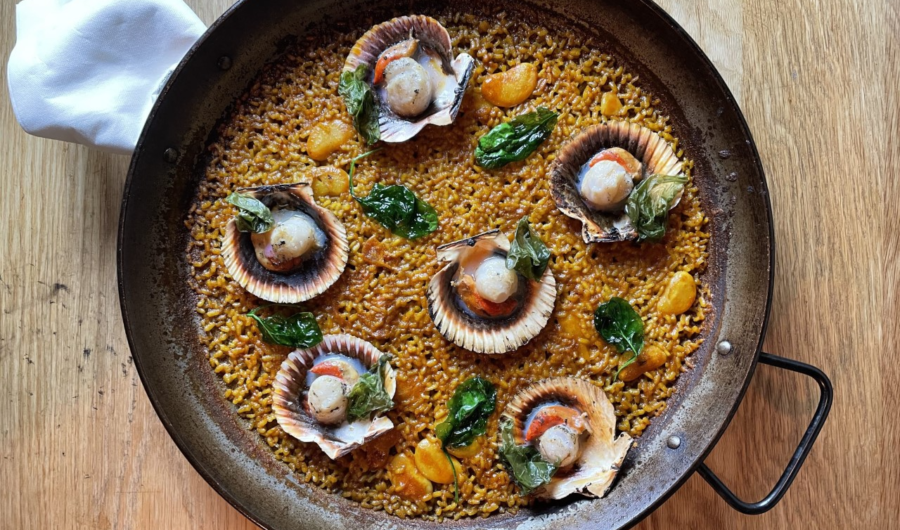 Arros QD will be championing the best British produce on its signature Valencian menu. A common misconception is that a ‘Paella’ is the dish itself, when actually it is the pan, ‘Paella’ means ‘frying pan’ in Valencian and a true Valencian paella is traditionally made using the ethos – Producto de kilómetro 0 – whereby each paella is distinctive of produce found within the local community. Using a similar philosophy, Quique Dacosta has created four new Rice-in-Paella dishes, resulting in a series of hybrid ‘British Paellas’ which maintain their original Valencian DNA, whilst supporting British suppliers with key ingredients sourced from the UK.

To mark the launch of this new chapter for Arros QD, Quique Dacosta will be hosting a cook-along on Thursday 8 April, 6pm, teaching diners the art of paella making and showcasing the British suppliers they are championing, such as HG Walter and Celtic Fish & Game. The restaurant will be switching out traditional Spanish produce for the likes of Cornwall scallops, Berkshire pork and Northumberland halibut. The new menu includes the likes of Cornish Queen Scallop Rice, Berkshire pork belly Rice, Morel and wild garlic Rice and Northumberland Halibut Rice, paired with two options of English wines that feature on their award-winning wine list.

Subsequent cook-alongs will be held once a month, led by Arros QD’s Head Chef Richard de la Cruz, who will explain the concept behind each dish, how to cook it, and why it’s important that we make changes to support UK suppliers. With all ingredients, paella pans and premium stock (the key to a good paella) posted nationwide, guests can enjoy learning first-hand how to master the art of paella making, and a little about why it’s important to support the local fishing and farming industries in the process. Bottles of British wine will be available, selected by head sommelier Jose Balado to complement each dish. Tickets start at £68.