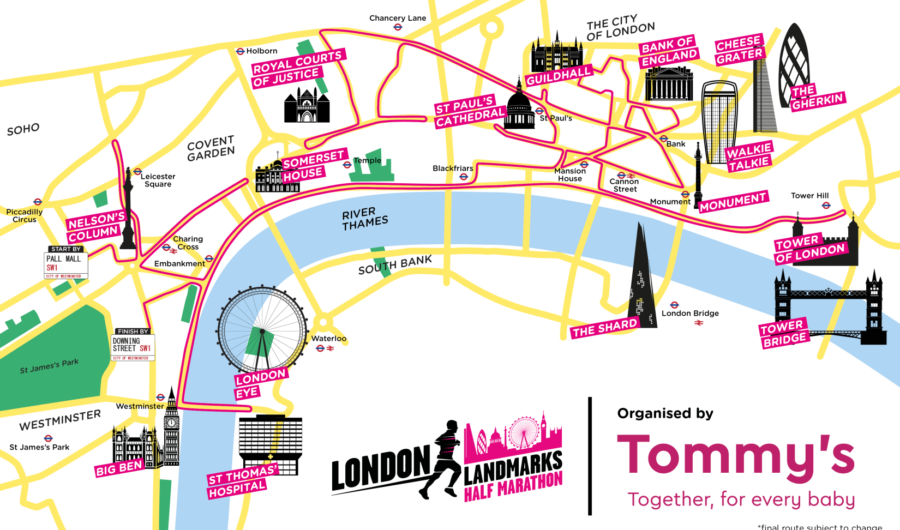 The London Landmarks Half Marathon returns for 2023 and it’s bigger than ever before. Join 16,000 runners at the start line for London’s most iconic half marathon event.

Taking place on Sunday 2nd April, LLHM is a celebration of London’s grand, quirky and hidden heritage and the only half marathon to take place on closed roads throughout Westminster and the City of London.

LLHM is set against the backdrop of London’s most impressive sights including Big Ben, St Paul’s Cathedral, the Shard and the Tower of London, as well as some of the hidden highlights of the city such as Dr Johnson’s house who was the creator of the English Dictionary, the Bow Bells and hidden Roman Baths. Organisers have also made plans to slightly adapt the course so that they can officially welcome wheelchair entrants in 2023.

Organised by the UK’s leading baby charity Tommy’s, this unique event has increased its participation for this year, and will see 16,000 runners cross the start line in 2023, all helping to raise vital funds for charity.

With the public ballot for places now closed, the only way to run in the LLHM 2023 will be to run for a charity. With over 400 charities partnered with the race, there will be a charity that touches the heart of everyone.  From Tommy’s to the NSPCC, British Heart Foundation to Prostate Cancer UK, there really is something for everyone to support.

Whether it’s your first half marathon or fiftieth, the London Landmarks Half Marathon offers something for everyone, celebrating every runner who makes it across the finish line. So dig out those trainers and join LLHM for 13.1 miles across the Capital.

« Awaken Your Unlimited Power
Back To Calendar
The Love Trails »